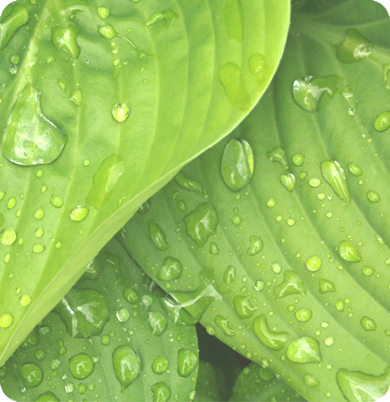 Fight Off the Flu by Showing Some Muscle

Flu shots arrive and can arm you against illness

How can you tell it’s September in Chicago? Well, the kids are in school, temperatures fluctuate wildly, Pumpkin Spice lattes sprout up all over; and the first round of colds and flu’s catch people off guard. With still about two weeks to go until the flu season begins in October, the office of Dr. Algimantas S. Kerpe, Internal Medicine, is ready to help keep the community on its feet and feeling good this Fall. 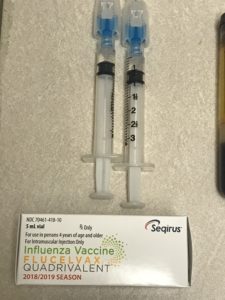 Flu shots are available through Dr. Kerpe’s office, located at 2172 Blackberry Drive, Suite 204, in Geneva. Anyone ages 16 and up may be vaccinated in this friendly, medical setting. The public is welcome. No appointments are necessary. Most commercial and Medicare insurances are covered with $0/copay. Self-pay discounts available.

Carol Vallo, 52, who has served as Dr. Kerpe’s clinic manager for the past six years, started preparing for the 2018-2019 Influenza Season last February when orders needed to be placed for vaccine.

“It can sometimes be difficult to get influenza vaccines in a timely manner and in enough quantity at the local physician office levels, Vallo said, “Initial shipments typically go out to hospitals and big retailers first.”

“We’re ready here however,” she continued. According to Vallo, the particular flu shot she’s giving patients this year has some differences from last year. First, it’s a quadrivalent, cell cultured-grown virus, Flucelvax by Seqiris. That means it covers two Influenza A and two Influenza B viruses. Second, it’s egg-free and safe for people with egg allergies. That also means it has a better chance of matching the viruses are actually in circulation. Finally, it’s approved for a wider range of ages, starting at ages 3 and up.

Is there anything that won’t change in 2018-2019? Well, the answer is “yes.” First, the flu season will come, just like it does every year. While peak outbreaks may vary slightly from year to year, highest numbers are reported in January and February. Kane County surveillance of schools, hospitals and nursing homes runs from October to May according to the county’s website.

Similar to past years, the majority of flu shots wil be administered by injection across most medical and retail settings. There are several other routes of injection including a nasal spray and an intradermal pump that may be suitable for certain ages or medical conditions. 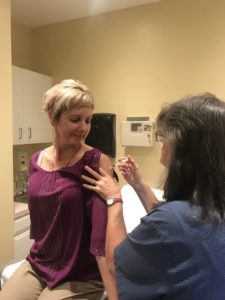 Vallo describes the vaccination that she administers under Dr. Kerpe’s supervision as feeling like a quick, painless “pinch” in the left or right deltoid. “Just roll up your sleeve and I’ll be done before you even know it.” She recommends getting your shot from a professional medical provider and acknowledges that you may feel a little tired or sluggish for a day or two. It can’t compare, however, to the intensity or duration of getting full-blown Influenza.

Influenza still kills people each year. The Center for Disease Control (CDC) recommends getting a flu shot annually for everyone; especially those with health conditions. Vallo, who has worked in various medical roles and environments over the past 20 years, knows the importance of getting vaccinated first-hand.

“I’ve seen what influenza can do to the body from both sides of the bed,” she said referencing her experience both as a healthcare worker and as a patient. “While all viruses aren’t covered by the vaccine,” Vallo concludes, “getting your shot, in combination with other methods of prevention like washing hands frequently, covering your coughs, staying home when you’re sick, is the best way flex some muscle to protect yourself and others from becoming sick.”

Dr. Kerpe’s office is open Mondays, Tuesdays, Thursdays, and Fridays during the week; and every other Saturday. For questions, please call 630.262.3327.